The first Thanksgiving I didn’t travel home to see my family, a friend joined me to cook a meal.  Neither of us knew much about cooking but she brought some store-prepared food and I think I managed to compose a salad. Mostly, we focused on feeling grown up and independent.  This friend had just broken up with a Turkish boyfriend whose positive attribute was that he had taught her how to make ginger tea. Once we had finished our meal, she showed me his technique and we thought it was exotic and delicious.  I have since fiddled with the very simple recipe and although I don’t make it on Thanksgiving anymore, I do make it whenever someone has a stuffy head or scratchy throat or needs warming from the inside out.  It was perfect this week in New York when we had single digit temperatures. Add or subtract honey (I like it pretty sweet) or substitute agave or maple syrup, if it tastes better to you.

Coarsely grate ginger into a saucepan and cover with the water. (If you are in a big hurry, you can simply slice the ginger but it won’t be as strong)

Bring to a boil and then turn down to simmer for 10 – 15 minutes.  Turn off heat and let sit for 5 minutes. (If your head is stuffy, cover your head with a towel over the pot and breathe in the steam once you turn off the burner – just don’t get too close or you will burn your nose!)

Add honey and stir to dissolve.

Stir in lemon juice and strain tea into cups.

If you have some left and want to reheat it, don’t boil – just heat until it starts to move so you don’t overcook the honey and lemon.  This tea stores well in a glass jar overnight in the refrigerator and tastes so good re-warmed in the morning. It is also delicious mixed into tea, especially green, about half ginger mixture and half tea, cold, as a bracing ginger lemonade or as a replacement in a mixed cocktail for ginger beer.

Here is a simple salad to make in the winter months when Fuyu persimmons (the small flat ones) are available. All you need to do is wash and dry the arugula, cut up the persimmons and toss with this very basic lemon dressing. Any of the add-ins will make it a fuller-bodied dish, especially the cheese, which can make this a very nice main-course salad, particularly if you are trying to lighten up a meal. And the orange and green are beautiful, especially mid-winter. We often make a double batch, refrigerate half and eat it again for lunch the next day – it holds up pretty well in a lunchbox, if you don’t overdo the dressing. 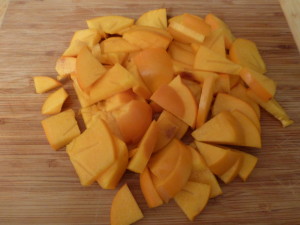 Add-in your choice of:

For the dressing whisk together: 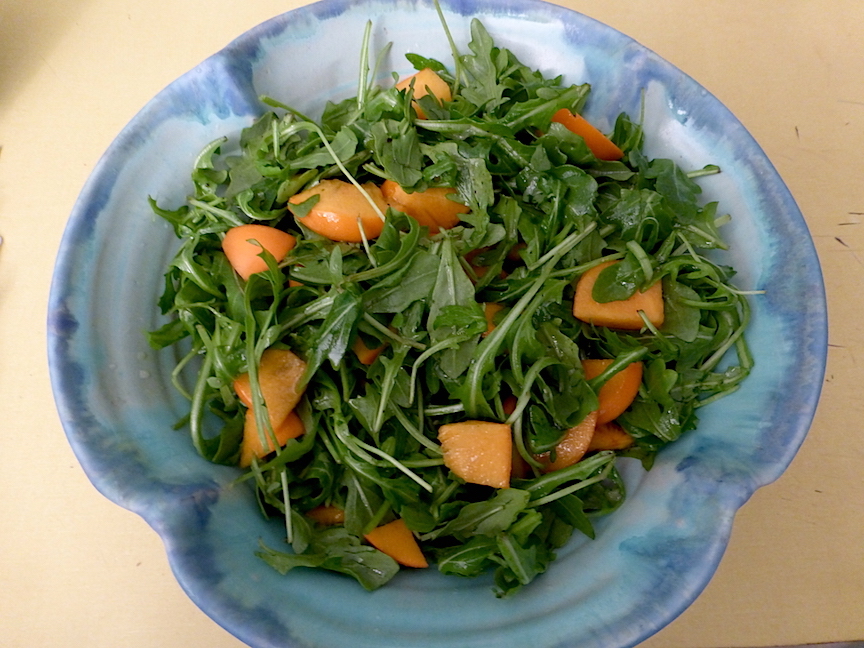 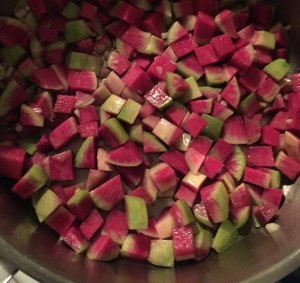 I don’t love raw radishes but I do love their color. So I eat them when they arrive in the spring, not only because I think variety is healthy but also since I’ve read repeatedly that radishes are good for digestion. Plus, they are low in calories and high in fiber. My problem is that I don’t love their sharp taste. On a positive note, I have found that I dislike them less when I salt them and as I get older (maybe my de-sensitized tastebuds?). Eating raw, salted thinly-sliced radishes on buttered bread, as the French do, is delicious, which may have more to do with the wonderful taste of butter and bread. So why bother, you wonder?

Radishes are a fine source of dietary minerals. And they can be quite beautiful, especially the pink and purple ones. The watermelon radish, my favorite, is available late summer and fall and stores well into the winter and even spring in the fridge. This is a mildly spicy variety, which is good in small pieces in a salad, adding crunch and color. And the color – wow! A thin white ring surrounds the gorgeous magenta interior and just under the skin lies a bright lime green layer. If you peel it very lightly, yes, it resembles a slice of watermelon. A few slices enliven a crudite platter or a salad, but my favorite way to eat it is lightly sautéed. You can roast radishes alongside your other winter veggies like parsnip, rutabaga, carrot and beet but a simple sauté leaves a slight crunch while losing the sharp bite. The color is enough to brighten a dark winter table!

Wash and gently peel two radishes so as not to lose all of the green flesh that lies just under the surface. Cut in a large dice or into small triangles like watermelon slices. Heat a teaspoon or two of olive oil in a wide frying pan and when shimmering, sauté 2 cloves of minced garlic. Add a sprinkle of salt, add the radishes and a big pinch of thyme and black pepper. Cook, stirring often until starting to brown and the radish pierces easily with a fork but is not soft. Add a little water if they start to stick to the pan. Taste to see if you want more seasoning and serve warm.