The first Thanksgiving I didn’t travel home to see my family, a friend joined me to cook a meal.  Neither of us knew much about cooking but she brought some store-prepared food and I think I managed to compose a salad. Mostly, we focused on feeling grown up and independent.  This friend had just broken up with a Turkish boyfriend whose positive attribute was that he had taught her how to make ginger tea. Once we had finished our meal, she showed me his technique and we thought it was exotic and delicious.  I have since fiddled with the very simple recipe and although I don’t make it on Thanksgiving anymore, I do make it whenever someone has a stuffy head or scratchy throat or needs warming from the inside out.  It was perfect this week in New York when we had single digit temperatures. Add or subtract honey (I like it pretty sweet) or substitute agave or maple syrup, if it tastes better to you.

Coarsely grate ginger into a saucepan and cover with the water. (If you are in a big hurry, you can simply slice the ginger but it won’t be as strong) 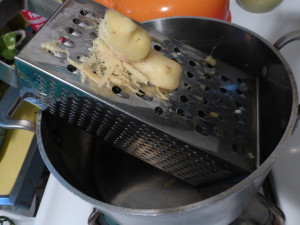 Bring to a boil and then turn down to simmer for 10 – 15 minutes.  Turn off heat and let sit for 5 minutes. (If your head is stuffy, cover your head with a towel over the pot and breathe in the steam once you turn off the burner – just don’t get too close or you will burn your nose!)

Add honey and stir to dissolve.

Stir in lemon juice and strain tea into cups.

If you have some left and want to reheat it, don’t boil – just heat until it starts to move so you don’t overcook the honey and lemon.  This tea stores well in a glass jar overnight in the refrigerator and tastes so good re-warmed in the morning. It is also delicious mixed into tea, especially green, about half ginger mixture and half tea, cold, as a bracing ginger lemonade or as a replacement in a mixed cocktail for ginger beer.